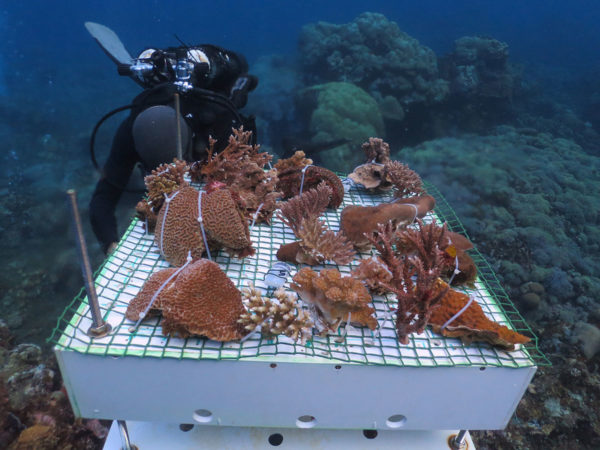 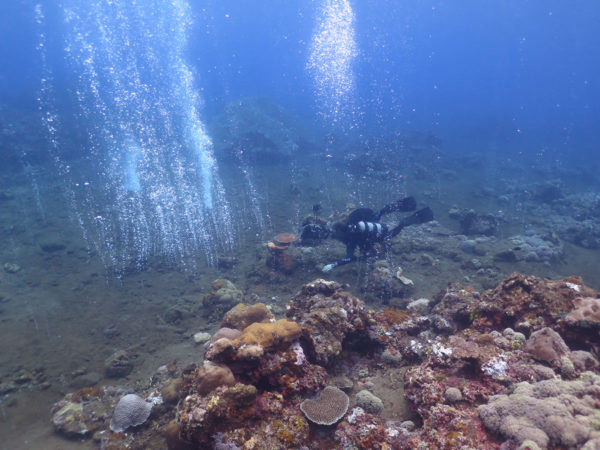 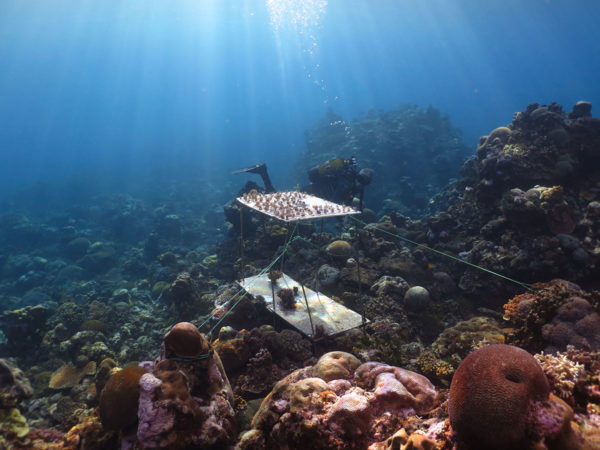 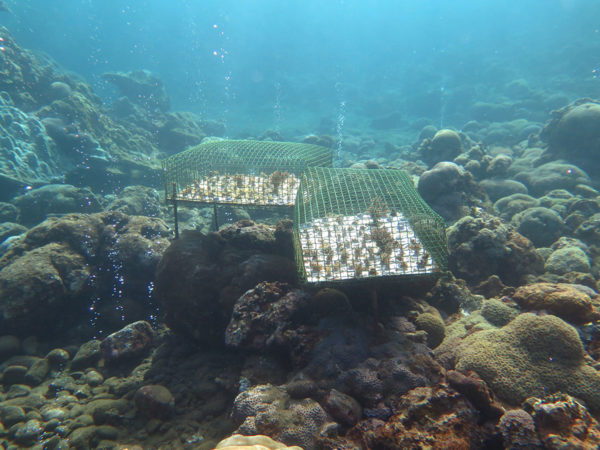 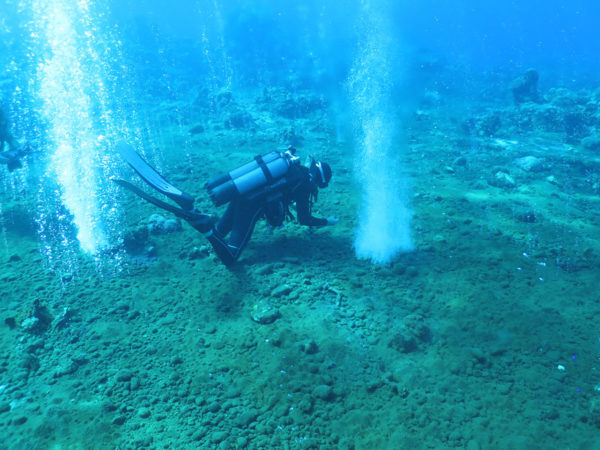 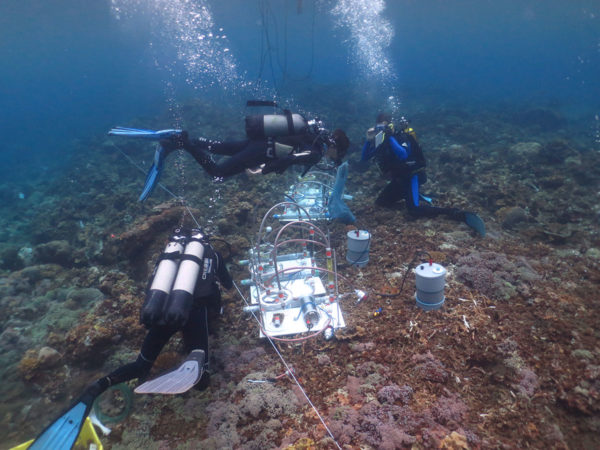 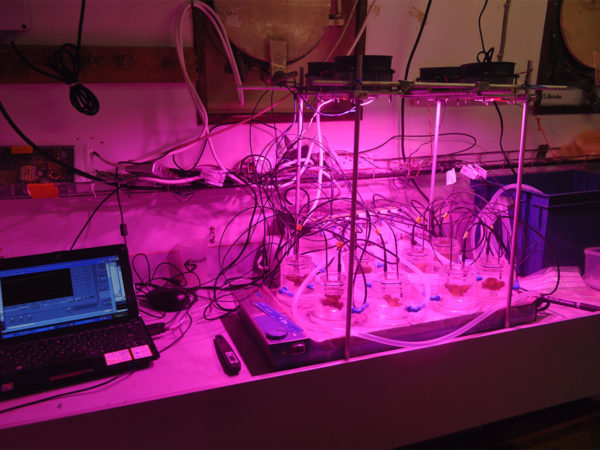 Main significance of the project. The CARiOCA project proposed to use the unique CO2 vent of Normanby in Papua New Guinea, which has seawater conditions similar to those expected at the end of this century, to identify the phenotypic traits that allow certain coral species to survive and reproduce in seawater naturally enriched in CO2.

Background. Since the industrial revolution, atmospheric CO2 levels have nearly doubled. As CO2 diffuses in seawater, it behaves like a weak acid leading to a drop in pH on a global scale. About a third of anthropogenic CO2 emissions have been absorbed by the oceans, driving the process of OA.

The change in the seawater carbonate chemistry due to OA is alarming because of its potential impacts on the ability of tropical reef-building corals and other marine organisms to form calcium carbonate (CaCO3) skeletons. Data show that a decrease in pH from current (8.1 units) to end-of-century projected levels (7.7-7.8 units) results in a 20-40% decline in coral calcification, and an increase in the dissolution rate of carbonate skeleton. Reduced coral growth, combined with weaker coral skeletons and reef substrata, will increase the probability of damage to structurally complex corals during extreme weather events, leading to a loss of reef structural complexity and rapid declines in reef ecosystem biodiversity.

However, much of our understanding of the effects of OA stems from short-term laboratory experiments of individual organisms (physiological or molecular responses) or from deterministic models. At the physiological level, recent studies have revealed that early projections of the effect of OA on marine calcifying species are likely to overestimate the impacts of OA as calcification rates of several species can be unaffected by OA depending on experimental conditions.

At this stage, there is no clear consensus about the physiological and molecular traits that underlie coral tolerance to OA and, consequently, reliable projections of the effects of climate change on reef ecosystems cannot be made.

Aims of the project. Our overarching aim is to understand whether and how corals acclimatize or adapt to long-term variation in ocean carbonate chemistry.

To achieve that we will use CO2 vents in Papua New Guinea to study coral response to ocean acidification. Natural CO2 seeps, where continuous emission of near-pure CO2 from below the seafloor alters seawater chemistry of the surrounding seawater, provide a powerful experimental tool to study the ability of coral species to acclimatize/adapt to future acidification levels.

Specifically, we will compare species that can survive under OA (‘winners’) to species that do not occur at CO2 seep locations (‘losers’) to create new knowledge in response to the following research questions:

Aim 1.  Is tolerance to OA achieved through physiological plasticity or genetic differentiation of the coral holobiont?

Aim 2.  Is tolerance to OA achieved through changes in the Symbiodinium community and microbial community associated with the coral host?

Aim 3.   Is tolerance to OA achieved through short-term and/or long-term changes in the expression of genes associated with cellular stress, immunity and general metabolism?

Aim 4.   How are the dynamics of coral populations likely to change in response to OA, given changes in physiology, growth and reproduction? 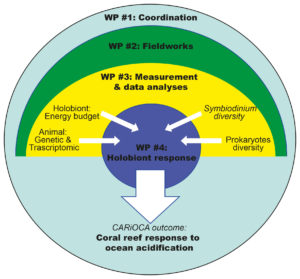 Fig. 1. Conceptual model of the proposed project. Samples collected during field expeditions to CO2 seeps in Papua New Guinea (WP #2) will be analysed during WP #3. Coral responses will be investigated at different levels of organization: i) coral holobiont physiological changes; ii) animal genetic identification and gene expression changes; iii) Symbiodinium communities diversity; iv) prokaryote communities diversity. WP #4 will integrate the multivariate responses of corals, symbionts and microbes to assess the effect of ocean acidification (OA) on the coral holobiont and to scale-up from the molecular to the population level. 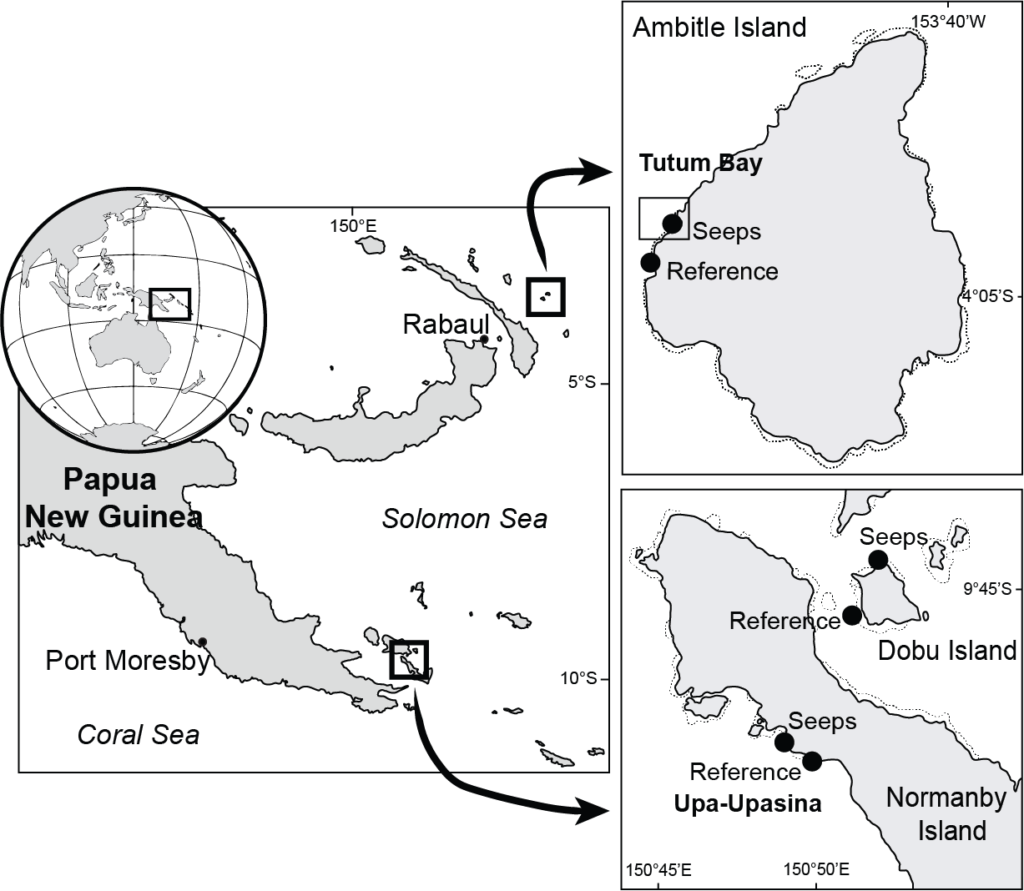 In all, six cruises have been performed so far for this project: three missions in Normanby using the N/O Chertan (the last mission covered by the KAUST University, Saudi Arabia) and three in Ambitle using the R/V Alis. The last cruise in Ambitle will be performed in September 2019.

Is tolerance to OA achieved through physiological plasticity of the coral holobiont (Aim 1)?

To establish the factors (microbial, molecular, physiological) that establish coral tolerance to OA we will conduct, at each of the two seep (and reference) sites, extensive field sampling of the two winners species at each of CO2 seep and reference locations. Phenotypic plasticity to OA will be investigated on the coral holobiont (i.e. organismal level, Aim 1) by measuring in situ metabolic rates, and by subsequent laboratory analyses of tissues.

Is tolerance to OA achieved through physiological plasticity or genetic differentiation of the coral holobiont (Aim 1)?

A reciprocal transplant of clonal replicate fragments from coral colonies will be used to determine whether variation in coral responses to OA is due to physiological or genetic factors. For this experiment, two of the dominant reef species (the ‘winners’, present at both seep and reference sites) and two of the species that are abundant at the reference site and virtually absent at seeps (the ‘losers’) will be selected.

Is tolerance to OA achieved through changes in the Symbiodinium community and microbial community associated with the coral host (Aim 2)? Is tolerance to OA achieved through short-term and/or long-term changes in the expression of genes associated with cellular stress, immunity and general metabolism (Aim 3)? 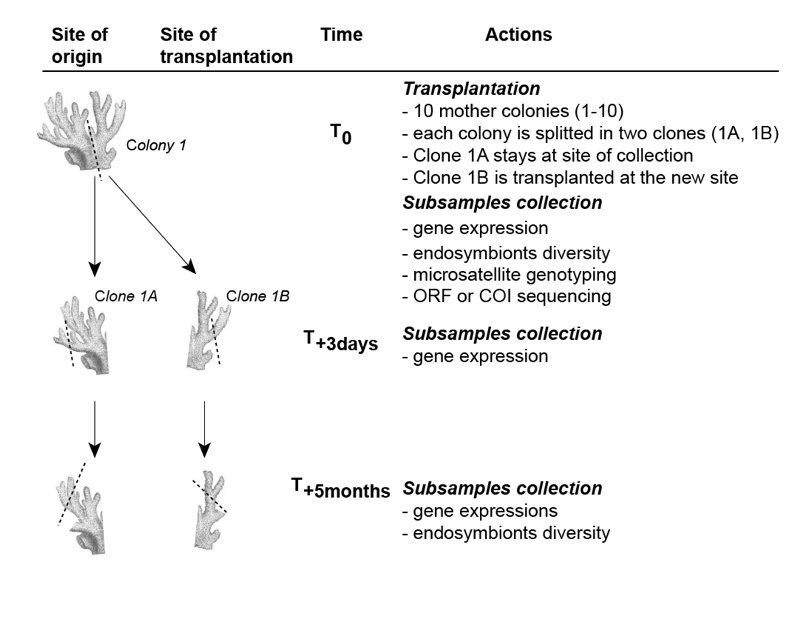 Fig. 5. Experimental design for molecular sampling. This design will be used for each of the two winner and the two loser species transplanted (6 treatments: A+B; C+D, and E+F; see Fig. 4). 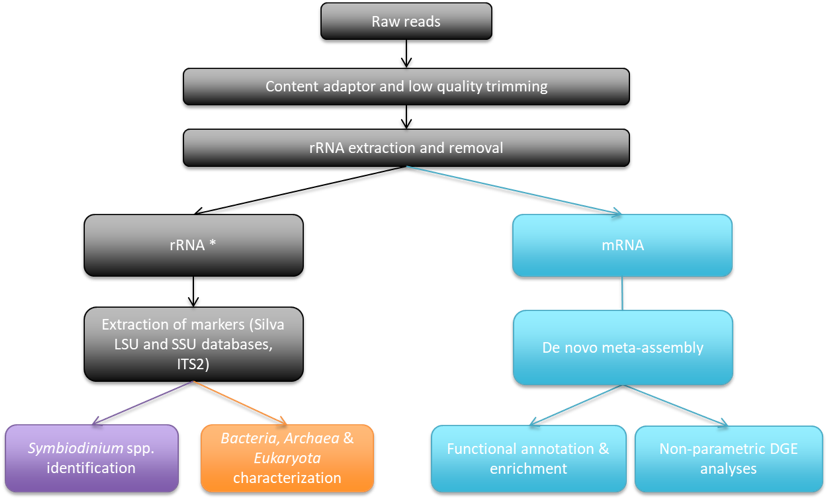 Scaling up from physiology to population dynamics. How the dynamics of coral populations are likely to change in response to OA (Aim 4).

We will use data generated throughout the project to parameterize a ‘scope for growth’ model for coral species growing under normal and elevated CO2 concentrations. Such models calculate energy available for growth (and/or reproduction) based on energy acquisition (in this case through photosynthesis and heterotrophic feeding) and energy losses through basic cellular maintenance costs and waste excretion (in this case, respiration and carbon excretion respectively).

Scientific Partners of the project ANR

Other collaborators to the project 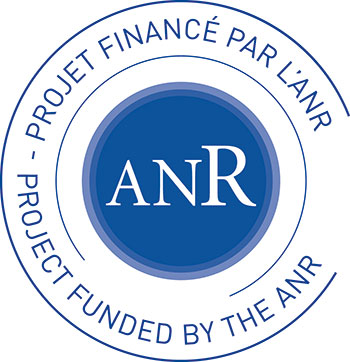 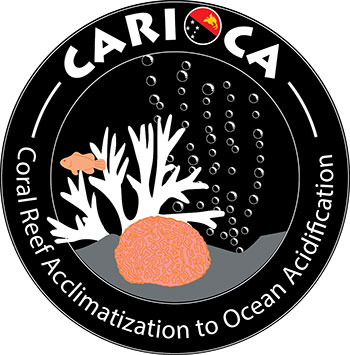 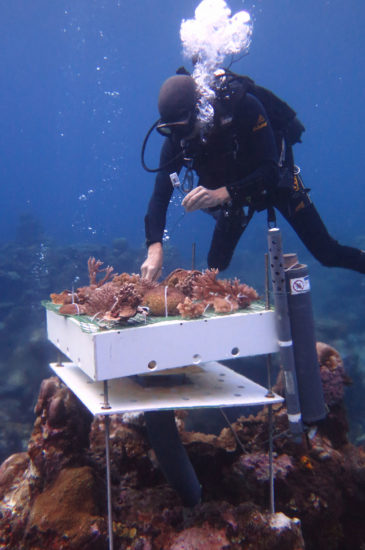 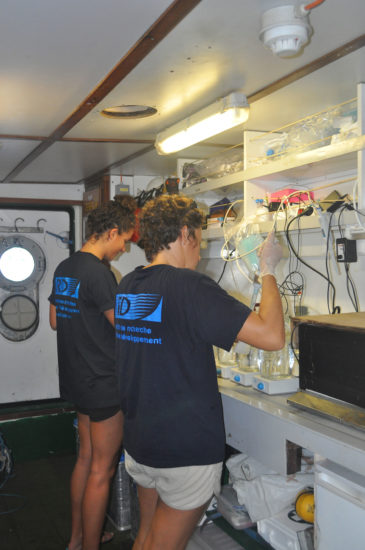 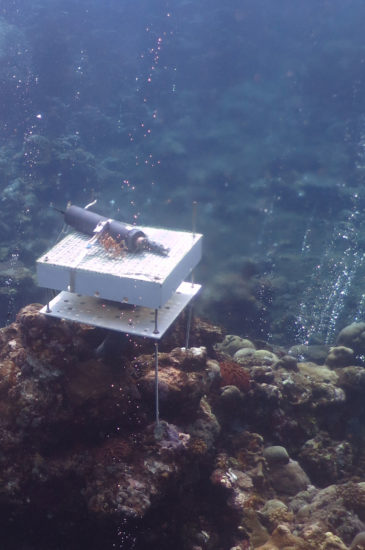 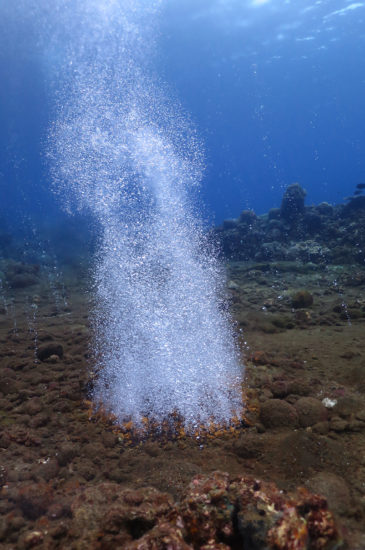 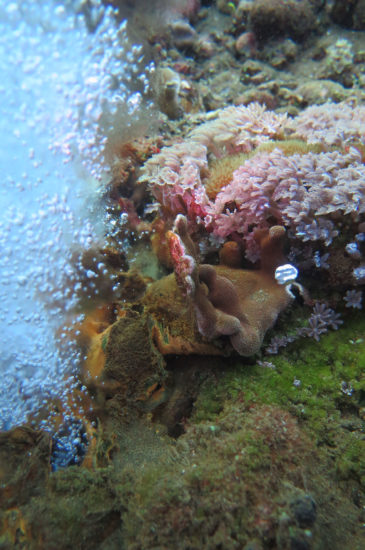 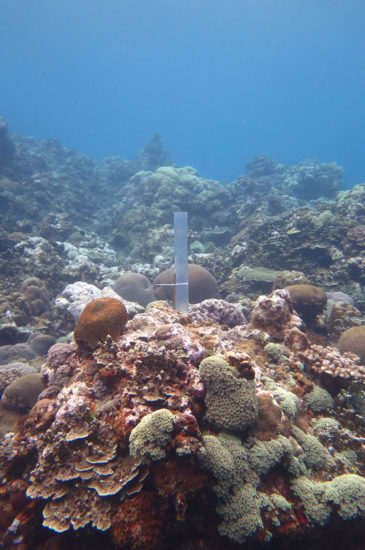